In a desperate attempt to keep my sun kissed holiday skin, I considered using something that I don’t have much experience of; fake tan. That’s not to say that I’ve never used it before. Of course, I used it back in the day as a teen before hitting up an ultra cool under 18’s party night down at the local leisure club. Purchasing a cheap instant tan that was infused with a copious amount of ‘sexy’ shimmer glitter was clearly the big thing back then, and the ultimate party look. An ultimate party look that was also patchy, orange and left numerous brown stains on your baby pink duvet set. Nice.

Obviously my short term love affair with glitter instant tan is now over and I’m in the market for something that’s ideally not going to leave me looking like a disco ball that’s just thrown up on an oompa loompa. That’s when I heard about the St. Tropez in-shower gradual tanning lotion.

With a tendency of being slightly lazy, I was naturally looking for something that involved minimum fuss and effort, so this product really sounded like it was right up my street – leave it on for three minutes in the shower and voila! But you’re probably going to want to know the nitty gritty details and my overall opinion about this one, so I’ll break it down nicely for you. 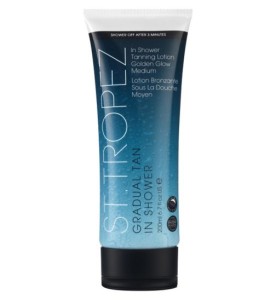 I bought this product from Boots for £14.50 a month or so ago. It’s currently on special offer at Boots for £9.67 which is a pretty decent saving, so I’d say now is the perfect time to purchase it and give it a whirl if you’ve been toying with the idea for a while. It’s not the cheapest out there, but St. Tropez is known for its quality and natural looking tan so it’s worth a go. There’s two shades available –golden glow and the lighter version. I went for the golden glow variety to keep my colour maintained.

As far as effort goes, this is so easy. Basically do your thing in the shower and cleanse your skin before using the tanning lotion. Turn the shower off and apply to the skin using circular motions with your hands – this will minimise the risk of streaks and undesirable patches. I wasn’t really too sure how much to use, so I used several rather liberal squirts and rubbed into my skin. By the time you’ve applied it to your whole body, you’ve probably already had it on for a minute or two. I’d say leave it on for an extra minute to let the product do its magic, before rinsing it off.

One of the main things that I love about this product is that it’s a really pleasant smell. So many times I’ve heard that fake tanning can be a bit of a gruelling and smelly process. After all, who wants to go out smelling like some kind of tropical solvent? But this one smells great and the aroma isn’t pungent at all! On further research, I discovered that this is due to the ‘Aromaguard’ fragrance technology which reduces the giveaway signs of self tanning and instead offers users a subtle and refreshing aroma.

What’s also brilliant is that the consistency seems just right (this is starting to sound a bit Goldilocks and the three bears!) it’s not too thick and not too thin so rubs into the skin really nicely and washes off with ease once you’ve left it on for the desired time.

The St. Tropez in-shower gradual tanning lotion has left my skin feeling super hydrated and smooth. I’ve only been using it once or twice a week, but I’m pretty sure I’ve noticed that my skin has maintained its holiday glow. As it’s a gradual tan lotion, don’t expect instant results.

Whilst I’ve noticed that I’ve still got my colour, I’ve also noticed that it hasn’t yet blended in with my white strap marks. They seem less white, but they’re not entirely golden.  I’m pretty sure that if I used this several times a week, or even on a daily basis I’d start noticing a difference with those pesky strap marks! So it’s time to step up my game and increase the routine.

Overall, I’d definitely recommend this tanning product. It’s easy to apply, smells great and simply washes off in the shower.  Oh and you won’t have the worry of staining your duvet sheets either with this one! I’ll add an update to this article in a few weeks to keep you in the know about using it several times a week!

Please note that the price of this product was correct at the time of publication. 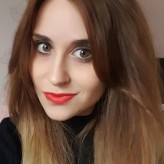 Pippa is head of content at Suit Your Look and specialises in fashion and beauty.